You are here: Home / Blog / Manufacturers 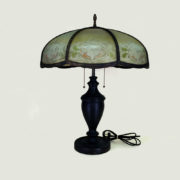 Old Lamps & Things is proud to carry Bradley & Hubbard table lamps. The Bradley & Hubbard Manufacturing Company opened its doors in 1852 in Meriden, CT. What many people don’t know is that the company actually began as a clock manufacturer known as Bradley, Hatch & Co.  In 1854, when the Hatch brothers sold their interests in the company, it became Bradley & Hubbard. By the second half of the 19th century and into the 20th century, it was one of the largest producers of kerosene lamps in the industry. Subsequently, they designed and manufactured gas fixtures in the late 1800s, gas/electric fixtures around the turn of the century, and beautiful electric pieces in the 1920s and 30s. Their products were considered of the highest quality and artistic merit. That’s why many of them are still around. They were made with quality that we don’t often see in today’s world.